Now that lockdown in France has been extended, we now know for sure that we will not be able to visit any museums or monuments for a few more months. If like me, you quite like looking at digital collections, but feel that nothing replaces a stroll in an exhibition space, virtual tours are what comes closest to the real thing. Here is my selection of digital tours to keep travelling, albeit virtually.

The Chauvet-Pont d’Arc Cave is named after Jean-Marie Chauvet, who discovered it on 18th of December 1994. It was inhabited 36,000 years ago, during the Aurignacian era, and boasts some of the most beautiful mural paintings of the Stone Age. The 435 animal representations include feared species (big cats, bears, mammoths, rhinoceros) and species more often represented in art, such as horses, aurochs, bison and megaceros. To admire these paintings, don’t miss the Salle Hilaire and the Salle du Fond!

The British Museum in London 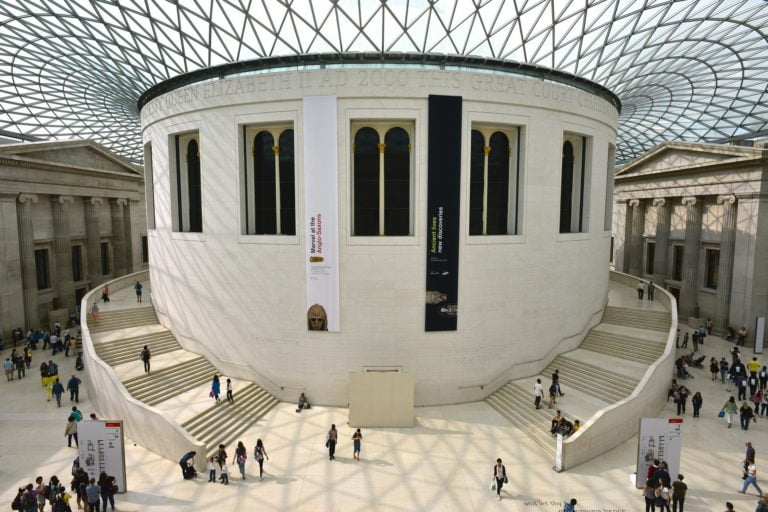 Antiquity buffs will surely enjoy browsing the (empty!) galleries of London’s British Museum. The virtual tour allows you to discover this universal museum and its collections that complement those of the Louvre in Paris. To move easily from one department to another, you can click on the images at the bottom of the screen. Greek and Roman Antiquities (do not miss the famous Elgin marbles – eighth image from the left), Asian arts, archaeology of the Americas, objects from ancient Egypt (and not just the Rosetta Stone!) or from the Ancient Near-East: there is something for everyone! 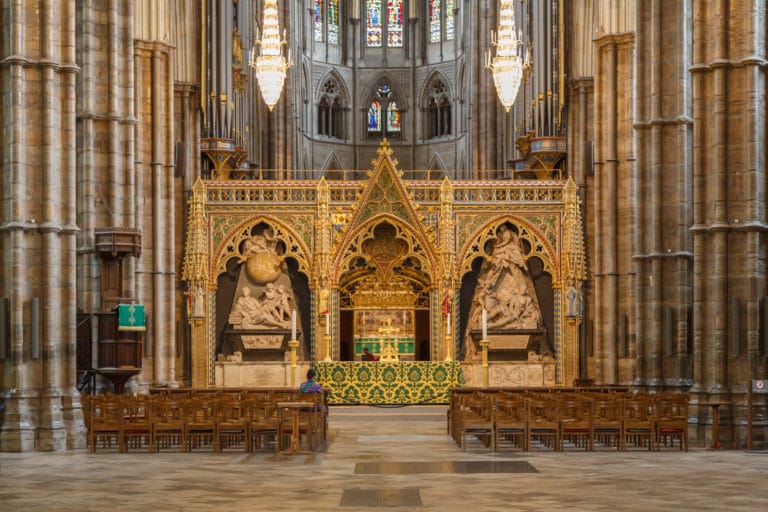 Founded in 960, Westminster Abbey took its modern-day appearance from 1245, when King Henry III had it rebuilt in Gothic style. It is the Coronation church for all kings & queens of England since William the Conqueror in 1066. But it is also an important place of commemoration since more than three thousand illustrious people are buried there. The virtual tour will allow you to get a closer look at the impressive tombs of Isaac Newton or Admiral Lord Nelson, the Cosmati pavement created in 1268, or the spectacular 15th century ceiling in the Lady’s Chapel.

The Raphael Rooms at the Vatican 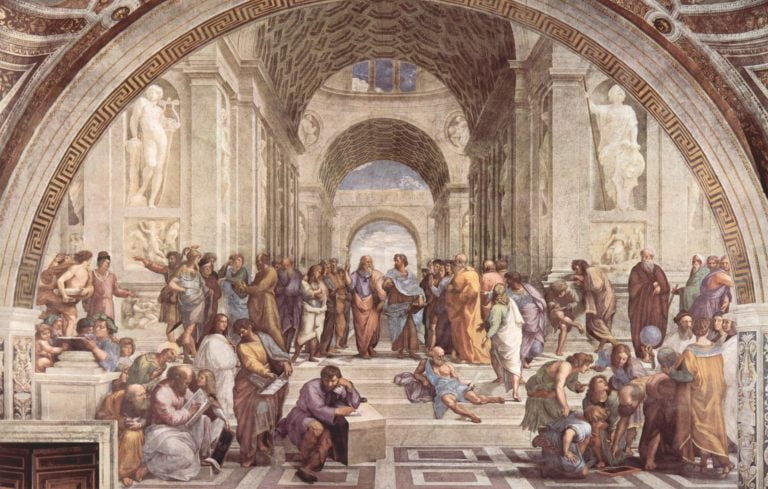 The four rooms known as Raphael Rooms are among the most treasured gems of the Italian Renaissance. Located on the second floor of the Papal Palace, they were commissioned by Pope Julius II to adorn his private apartments. The pictorial decor was created by Raphael and his workshop between 1508 and 1524. To visit them in chronological order, you must start with the Room of the Segnatura, where the famous fresco of the School of Athens then continue with the Room of Heliodorus, the Room of the Fire in the Borgo, before ending with the Hall of Constantine. 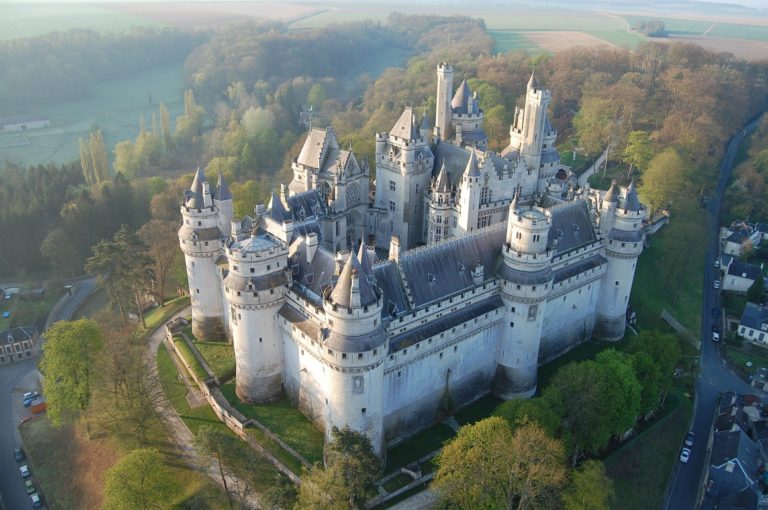 The Château de Pierrefonds was initially built at the end of the 14th century by Duke Louis of Orleans, before being largely destroyed in the 17th century. By the 19th century, Pierrefonds was in ruins. Louis-Napoleon Bonaparte visited them in 1850. Once he had become Napoleon III during the Second Empire, he asked architect Eugène Viollet-le-Duc to restore the building. In 1858, constructions began to recreate an ideal medieval castle. While he took many liberties with archaeological truth,  Viollet-le-Duc undertook an immense work of the imagination, making Pierrefonds a masterpiece of his own eclectic style.

The Frick Collection in New York 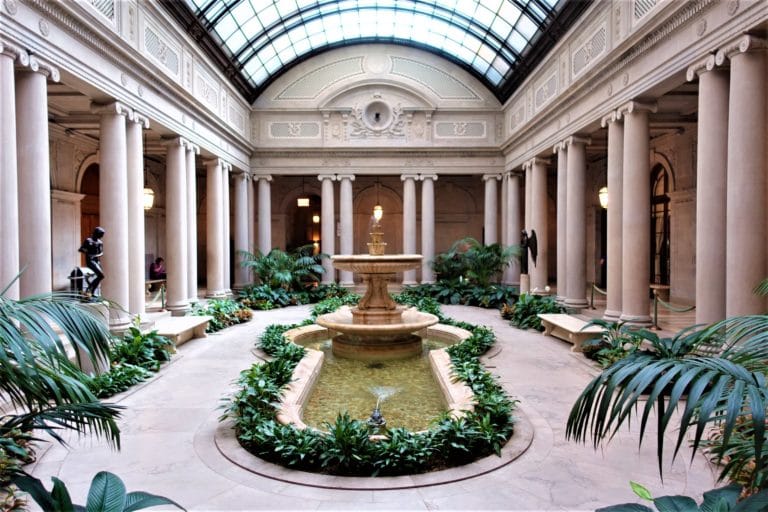 Of all the museums I visited in New York, the Frick Collection is definitely my favourite. Housed in a town house built by American industrialist Henry Clay Frick (1849-1919), this extraordinary collection brings together masterpieces by Rembrandt, Vermeer, Gainsborough or Whistler, as well as sculptures and pieces of decorative art. The bias of the museum is to mix techniques, without classifying the objects by chronology, thereby giving an intimate feel to this museum. In this virtual tour, you can click on the works of art to read more about them – and don’t miss out on the incredible Fragonard room!

The National Museum for Natural History in Washington D. C. 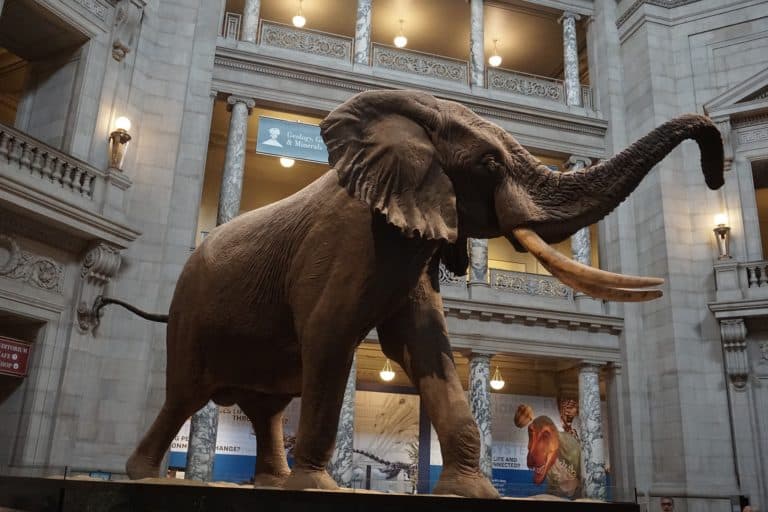 If you are into science museums, the National Museum for Natural History is a lovely example. This museum is part of the Smithsonian Institution, which was created after English scientist James Smithson bequeathed his fortune to the United States in 1846. Today, the Smithsonian brings together nineteen museums, parks and gardens. The natural history collections include impressive specimens of mounted mammals, dinosaur skeletons as well as minerals. The digital navigation is very easy thanks to the clickable map which allows you to track the places you have already visited.

The Dalí Theatre-museum in Figueres 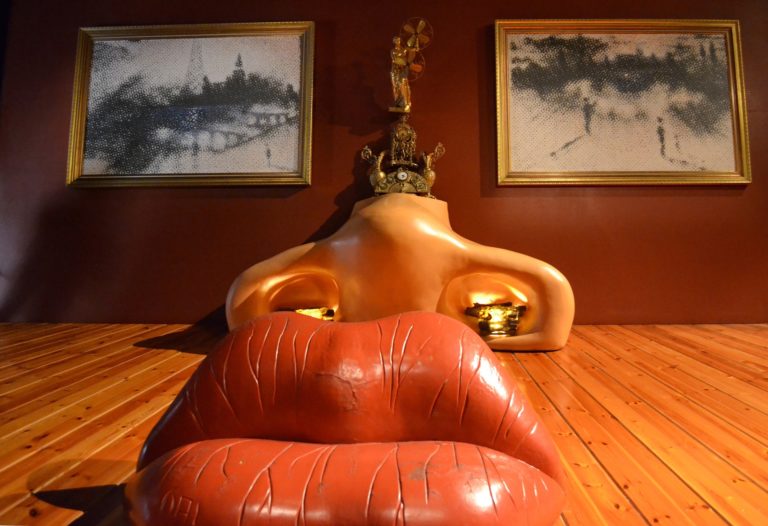 The Dalí Theater-Museum was inaugurated in 1974. It was built on the remains of Figueras’ former local theatre. It is one of the last great works by Salvador Dalí (1904-1989), who designed it as an immersive journey into his life and singular artistic universe. As he said himself: “It’s obvious that other worlds exist, that is for certain; but, as I’ve already said on a number of other occasions, these other worlds are inside our own, they reside on earth and are precisely at the centre of the Dalí Museum’s dome, which contains the new, unsuspected and hallucinatory world of Surrealism.” 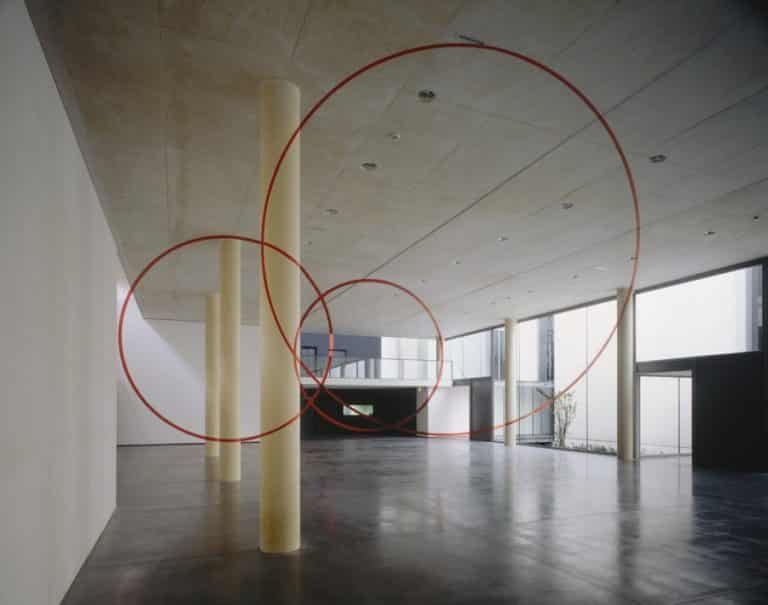 The Contemporary Art Museum of the Val de Marne , or MAC / VAL, is one of my favourite museums in the Paris area. It is devoted to the art scene in France since the 1950s and presents a new exhibition of its permanent collection every year or so. The virtual tour of the MAC/VAL allows you to browse the hanging from 2014, called “With and without painting”, which explored how this medium was used by contemporary artist. Among the highlights, don’t miss Felice Varini’s anamorphosis (pictured above!). 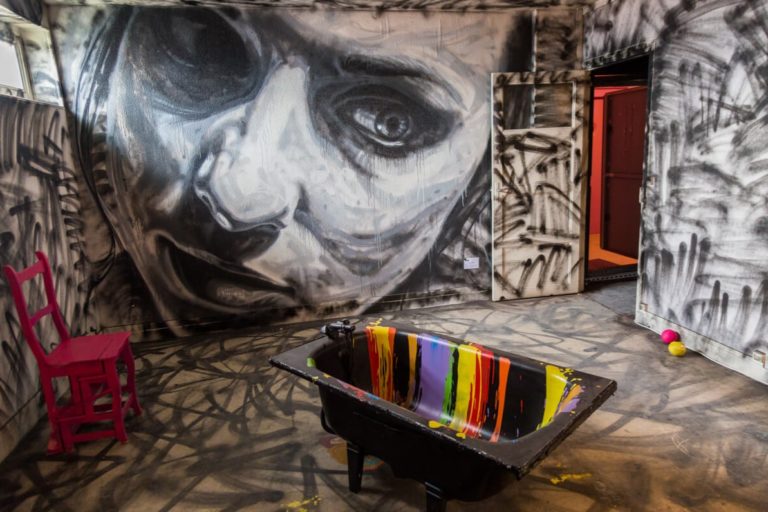 The Street Art lovers out there may have had the opportunity to visit the Tour 13, a building that was located rue Fulton in Paris. The Itinerrance Gallery mobilised a hundred street artists to decorate the walls, ceilings and floors of the nine story apartment building. After opening to the public in October 2013, the building was destroyed in April 2014 to make way for new social housing. But thanks to digital technology, there still remains a record of this extraordinary ephemeral project.

The Soulages show at the Lympia Gallery in Nice 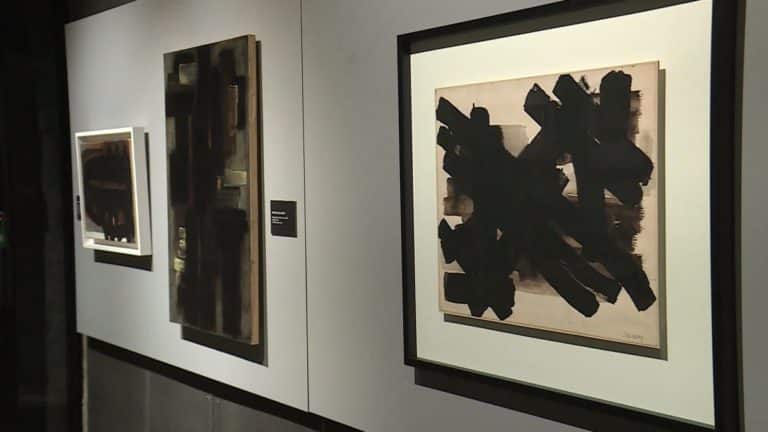 The 2019-2020 artistic season devoted many exhibitions to Pierre Soulages – and with good reason, since this contemporary French artist celebrated his hundredth birthday in December 2019. Some of you may have seen the tribute to the master of outrenoir (‘beyond black’) at the Louvre. Soulages is the only artist, besides Picasso and Chagall, to have had granted an exhibition of his work there during his lifetime. In Nice, the Galerie Lympia’s exhibition showcases seventy-two works by the painter, fifteen of which have never been shown to the public. 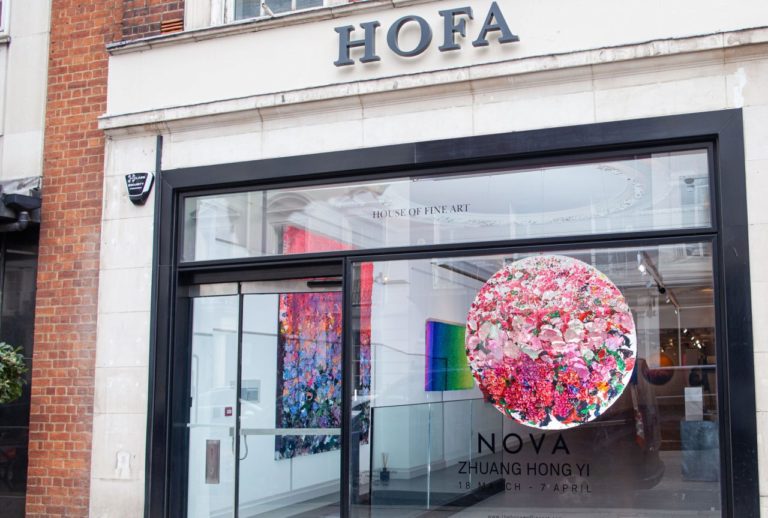 Contemporary Chinese artist Zhuang Hong Yi was born in 1962 in the Sichuan Province. Since 1992, he has been living and working between the Netherlands & Beijing. During his studies, he learned how to shape rice paper, which is a traditional Chinese craft. The pieces from his “Nova” exhibition are made of rice paper, mounted on canvas and painted in acrylic. The House of Fine Arts’ virtual reality tour allows us wander in the delightfully colorful and textured world of Zhuang Hong Yi’s sculptural paintings, inspired by nature and flowers.

Which spot would you love to take a virtual tour of?

10 inspiring women artists for the 8th of March!

“Spirit, are you there? The Painters of the Beyond” at the Musée Maillol in Paris

Item added to your cart

Continue Shopping Go To The Cart